If you were to ask 10 different modeling experts whether they’d prefer a gas or electric motor in their own RC cars, then you’d probably get 11 different answers. Opinions tend to be that varied when it comes to this relatively hot button issue.

However, there are a few questions you can ask yourself that can help you decide, once and for all, which technology you’d prefer to have under the scale hood of your remote control car or truck.

Keep in mind that there’s no reason that you have to decide one way or the other. Many modelers keep gas and electric cars around in the same workshop.

As long as you have plenty of batteries and other accessories to maintain everything in good working order, then you shouldn’t run into any major difficulties. That being said, and depending on your preferences, you may want to consider electric motors first.

What are the Benefits of Electric RC Cars?

Perhaps the biggest advantage of using an electric motor is the fact that you won’t have to rush out all of the time and get more fuel. While you can now find a wide variety of model fuels and parts online to mitigate this advantage to some degree, it’s hard to argue that charging a battery is more difficult than maintaining a fresh fuel supply.

Because, let’s face it, with an electric RC vehicle, all you have to do is plug in your charger and get some fresh juice. Moreover, while this used to take longer at one point, things have changed as a result of the advent of quick chargers and other gadgets that make the process much simpler.

Ease of maintenance is another factor since you won’t have to mess with any fuels or other fluids in most cases. Finally, electric motors and consumables tend to be more affordable as well.

What are the Benefits of Using Nitro RC Cars

Electric RC vehicles are pretty popular, thanks to their simplicity. However, gas-powered or “nitro” RC vehicles might be better when it comes to the amount of time you can operate them before you need to refill them.

Since they’re actually running on an internal combustion engine, of sorts, they’re also going to behave much more like a real motor vehicle would. Some fans of model car racing even appreciate the noise they make, since the sound lets them know how the car is performing, while also making them feel more like they’re driving a full-sized car or truck.

Gas vs. Electric RC: Which has a Higher Top Speed?

Interestingly enough, in most cases, you won’t have the speed to think about as a deciding factor between the two technologies. Vehicles have to perform within a certain tolerance regardless of the underlying equipment that powers them.

If you have a Traxxas model, for example, that claims to be able to do 60 MPH, then both types of technology should be able to do that. Nitro RC motors will last longer before they need a recharge, however. You’ll also enjoy the other advantages that come with this kind of internal power plant.

Nitro vs. Electric RC: Which is Best for Beginners?

We typically recommend sticking with electric for beginners, and nitro or gas models for those with a little more experience, or the desire to tune the engine and learn more about the mechanics. While tuning and operating a nitro vehicle will require more patience, it can certainly be a rewarding experience for those up to the task.

Electric vs. Nitro RC: Which is Faster?

In general, nitro is always going to be the fastest fuel source that most modelers will use. Some RC racing organizations have actually banned them because they’re just that good and have a tendency to be dominant on both long and short tracks.

In almost all instances, something that’s powered by liquid fuels is going to be faster than an electric vehicle if everything else is completely equal. Assuming that they’re all working correctly, it’s not much of a contest, though there are some extremely fast electric vehicles that are so fast off the line, that this is beginning to change. The Traxxas Bandit, for example, can achieve speeds over 70 MPH! 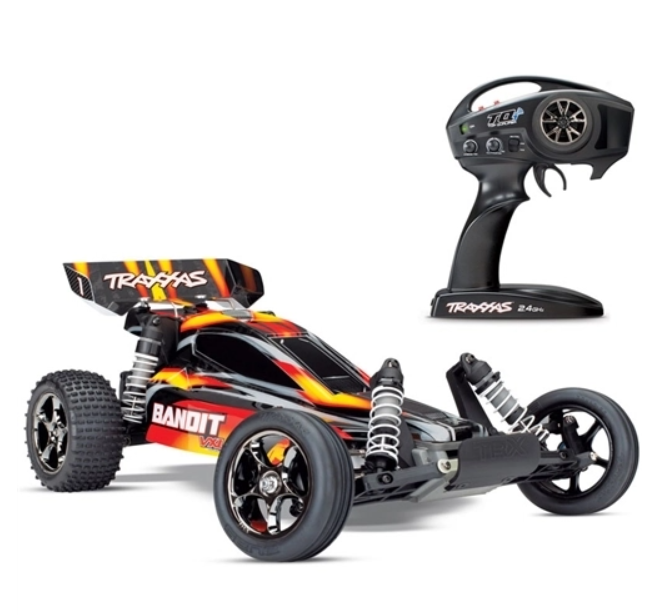 Some nitro RC vehicles have a tendency to take corners too fast, but this might actually be desirable in many situations. Those who are looking for an extremely generous acceleration curve are certainly going to appreciate this fuel source.

While these are indeed gas powered, they’re not going to need anywhere near as much fuel as the vehicle you might have sitting in your garage. Traxxas vehicles are designed with efficiency in mind, but this in no way sacrifices their top speed.

Many of their gas powered RC cars have some of the highest top speeds in the industry while also providing decent handling features. Considering the amount of power that these offer, there’s certainly a bit of a learning curve.

However, it’s very rewarding to finally master this kind of vehicle. Like all internal combustion devices, these will eventually require consumables like air filter oil, which you’ll want to have on hand when racing seriously.

Though they technically may not have the same exact high speeds that their gas powered equivalents do, electric Traxxas cars tend to be very easy to maintain and quite durable. This has made them one of the best picks for those who do a lot of vertical ramp running, since they want to drive something that’s going to hold up to a ton of abuse. A lot of the more aggressive model stunt racers will basically treat these things like remote controlled skateboards, which has made their electric models very sought after in this side of the market.

Many Traxxas vehicles, like the Slayer Pro 4×4, come in both electric-powered configurations as well as those that run on gas. Some model drivers will first buy the electric one and then they’ll switch to the gas powered model once they’re used to racing it. 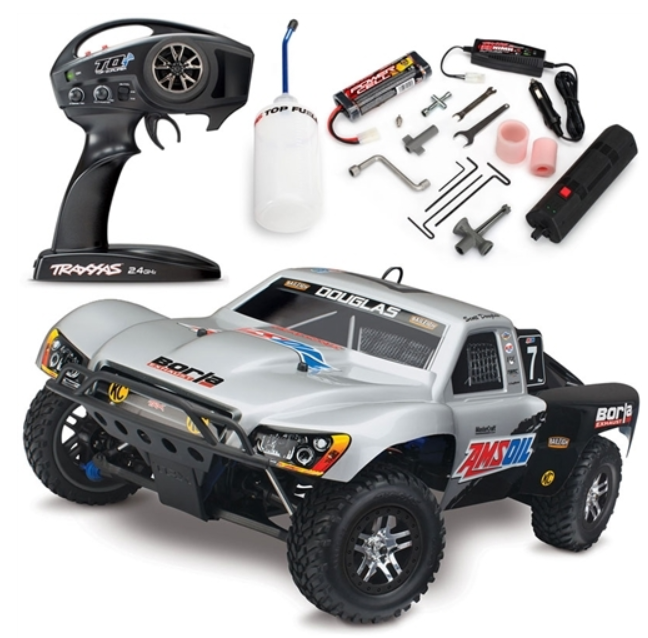 They may even continue to use the electrically powered one for practice. There’s no reason, after all, that you can’t have both sitting in your model room.

Fuel Your Passion for Everything RC at RC Superstore

At RC Superstore, we understand that it can feel overwhelming to find the perfect RC vehicle for you. For more information about how to choose between electric and gas RC cars, make sure to reach out to our team today.